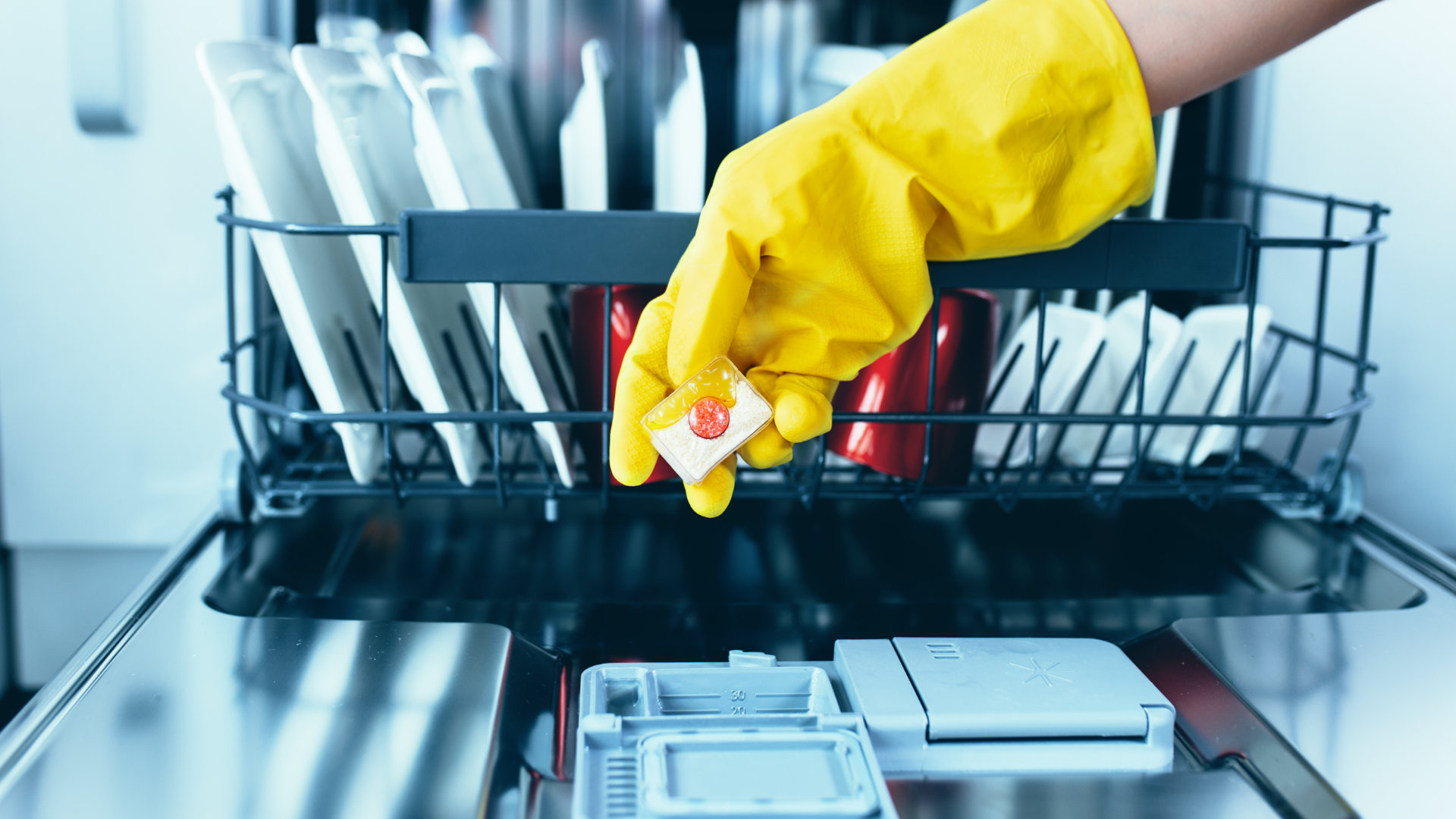 The dishwasher cup in a dishwasher is one of the most essential elements, second only to the sprayer arm and the door latch. Without the time-release soap cup, your dishes will get nothing more than an enthusiastic rinse. For real cleaning power, you need soap, and released at exactly the right time to hit wet dishes and achieve maximum suds. Then to rinse away fully in warm, clean water.

However, this doesn’t happen if the soap cup does not open. The single most likely culprit is soap pooled and caked in the latch mechanism. Especially if you have a flip-open soap dispenser like most models. When that latch cakes with soap, it can’t open or close smoothly. It scrapes if you push it manually and it certainly can’t flip open at the spring-load trigger of the dishwasher cycle.

Today, we’re here to talk about how to wash and scrub that latch so your dishwasher washes cleanly again.

The first thing to try is simple warm water applied directly to the latch. There’s water jumping around inside the dishwasher, but the latch area is sheltered by the lid and switch. Get water as hot as it comes from the tap. You can also heat it up on the stove or in the microwave. Then pour the hot water directly over the open, crusted soap latch. This should begin melting and breaking down the soap residue.

Scrub with a Nail Brush

Getting down into the soap dish with a dish brush makes a lot of sense, but dish brushes aren’t built for this job. What you need, as you will soo notice, is something with a shorter handle and better leverage. Try a nail brush instead. These have small hook-handles that slip comfortably around your fingers. You can scrub directly with stiff plastic bristles to help break up the petrified soap scum in and around the soap dispenser latch.

As you try other options, come back to the nail brush to both test a solution and clear away dissolved soap. Combine with fresh splashes of warm water for greater effect.

Sometimes the soap scum is not all soap. Scale is metallic and rocky minerals that are carried harmlessly in local water (the minerals come from local rocks in the aquifer) and they are left behind when water passes or dries on a surface. Vinegar dissolves and breaks up the chalky scale that is left behind. Vinegar is also a great universal kitchen cleaning product and solvent. It is natural, non-toxic, and dissolves many things safely.

Splash a little vinegar on your latch as you scrub it. Alternately, you can pour vinegar over or catch vinegar around the latch and allow it to soak for a few minutes to aid in dissolving the residue.

Chisel with a Nail File

If nothing dissolves or breaks up the rock-like substance around your dishwasher soap latch, then break out the chisel. And by this, we mean a nail or cuticle tool. The types of tools used to clean under nails and push down cuticles have a hard metal edge that has also been softened to avoid cuts or damage to the hands.

This is also perfect for dealing with stubborn build-up on appliances without scratching the plastic surface.

The last trick to try is a hot compress. This is a cloth, like a rag or hand towel, soaked in very hot water and pressed into the latch. Then leave the hot towel over the latch to steam-soak the residue. This applies heat and moisture consistently over time and you can do something else for five minutes while the latch steeps.

Come back and try scrubbing the scale again. It is very likely softened.

If all else fails, you can always replace the soap dispenser assembly. No need to reinstall the dishwasher over a plastic latch. Switch dishwasher detergent brands so this build-up doesn’t happen again and call for repairs.

Samsung Oven Error Codes: What Do They Mean?

Freezer Is Cold but Refrigerator Is Warm? Here’s What to Do

GE Refrigerator Error Codes: What Do They Mean?

How to Fix a Samsung Washer SC Error Code

How To Repair A Dishwasher Rack In 6 Steps